The words came out of her mouth, words I never thought I’d hear from my little sister on a Sunday afternoon… “Dad’s not going to make it.” I fell to my knees but it soon turned into being sprawled out on the grass in my back yard. I was too week to kneel. Too overwhelmed to keep my head up. I needed to lie down.

It was the first time in my life I was that overwhelmed. Overwhelmed with grief, pain, shock, and my head was spinning so fast I almost blacked out. It would not be the first time.. over the last few times there have been several moments where I would need to lie down so I wouldn’t black out. But in every circumstance someone was with me. When I saw my dad is the hospital after the accident. My friend Ramon had been in my dad’s room all night. Keeping guard. Waiting for the rest of the family to come. I was the last one to get there. He escorted me to my dad’s room. Then walked out to give me space. If he didn’t walk me through those doors, I might have passed out. Thank you Ramon.

Once my dad was transferred to hospice, we were waiting outside the room to get to see him. The feeling came again and I had to lie down in the hallway. My sweet husband caught on and sat down so I could put my head in his lap until we were allowed to go into his room.

There have been several other times since the summer that has happened. It wasn’t something I’d ever thought would happen during the grieving process. But it made a common Psalm come to life in a whole new way. Psalm 23:1-2

The Lord is my shepherd; I shall not want.
He makes me lie down in green pastures.
He leads me beside still waters.

He makes me lie down in green pastures. When I’ve heard that psalm before I always envisioned a picnic… Just a lovely day in the park. But today as I read it, I see the Lord letting us lie down and rest. Life it just too much, sometimes we can’t push through. Sometimes we need to stop and lie down in the hallway or on the grass. We need to just be. The Psalm continues in verse 4.

Even though I walk through the valley of the shadow of death,[c]
I will fear no evil,
for you are with me;
your rod and your staff,
they comfort me.

He was specifically talking about Death. Life is no picnic. But do you know happens when we lie down… Let’s look at verse 3.

He restores my soul.
He leads me in paths of righteousness[b]
for his name’s sake.

I don’t know about you, but I need some soul restoration right now. I feel worn and weak. I’m thankful for this promise from God. He is our good shepherd. He know what we need. Friends, it’s okay to lie down. But in the midst of that exhaustion, lie down your needs, wants, and pain unto the father. He’s the one who can do the restoration work.

Today I visited my dad’s “resting place.” Such a strange phrase since I know he probably hasn’t stopped partying since he was taken home. I wasn’t planning on going today, I’ve been avoiding it. But wanting to go at the same time. We got caught in traffic downtown and decided to go home another way… right by memorial park. Justin asked if I wanted to stop. I wanted to say NO, I really don’t! But I did. And he knew I needed to. As soon as we drove through the gate I felt that weight, and grief come over like a flood. I just barely made it to the spot and collapse and laid there for a few minutes. I was able to pray and as I did the clouds opened and sunshine burst through. It was warm. Like a hug from our heavenly father. I miss my dad. I always will. But I know if I let myself lie down. Restoration will come. 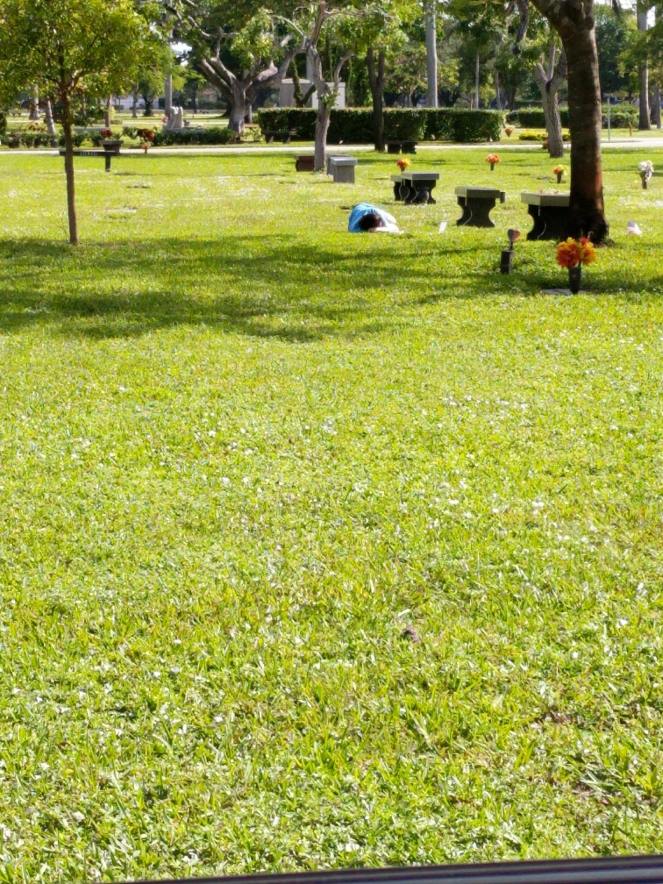 Justin took this picture. I almost deleted it… But it’s where I’m at. Miss you dad.

View all posts by Stephanie grace

7 thoughts on “I just need to lie down.”

This is a text widget, which allows you to add text or HTML to your sidebar. You can use them to display text, links, images, HTML, or a combination of these. Edit them in the Widget section of the Customizer.